Did you know that Lakeside North Harbour has its own football team? and a successful one at that. Ian Cox tells us more...

The team has been really successful since it was set up 2 seasons ago.  We won our league in our first season and have won 2 cups this season; one being the Portsmouth District Football Association Cup and the other being The London Cup.   We are hugely greatful to Northwood Investors (owners of Lakeside North Harbour) who have rewarded the team’s success with some financial sponsorship for the coming season which, along with interest from new players, has allowed us to submit a second team (reserve team) to the league for the new season, expanding the Lakeside community brand.

Being manager, one of my passions is about providing opportunities for our players to relieve stress, make friends and add to society. Football is a great leveler and great for building confidence. It allows participants the chance to forget all their hidden stresses whilst enjoying a physical activity. Without knowing it, they are actually reducing the ever increasing burden of obesity to the NHS and discouraging the growing computer console culture of young adults of today.

If you didn’t know about Lakeside FC and would like to know more, feel free to drop me a line. 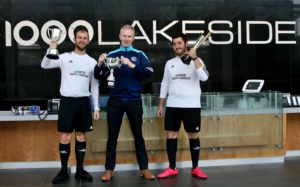 The importance of health and wellbeing at work – an HR perspective